Bollywood superstar Amitabh Bachchan thrilled Israeli officials in India after opening his home to the Israeli consulate in Mumbai.

The actor received gushing applause from Israel’s Consul General Yaakov Finkelstein for his “active role in cooperation between Bollywood and Israel”.

Finkelstein thanked Bachchan on Tuesday in a tweet following a meeting with the actor at his home. He was grateful to Bachchan for “opening [your] house & [your] heart for the Israeli consulate”.

“We are humbled by the honour and the kind words you bestowed on Israel,” Finkelstein said before applauding Bachchan for his “active role in the cooperation between Bollywood & Israel”. 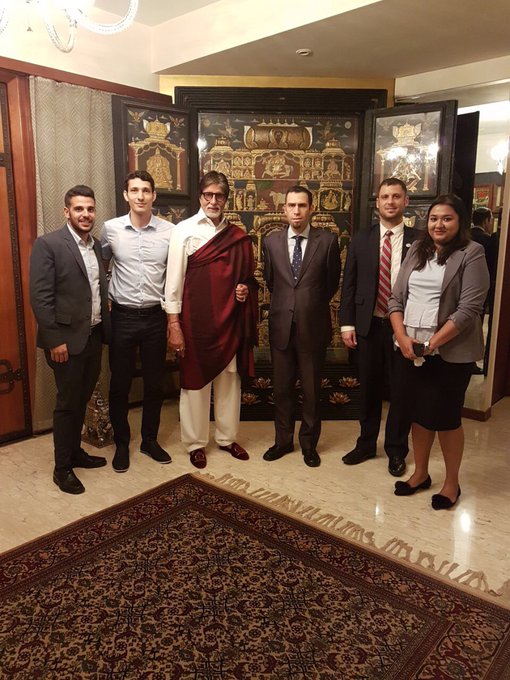 The meeting between Bachchan and the Israeli Counsel reflects a deepening of cultural and economic ties between Mumbai and Tel Aviv. Relations between India and Israel appear to be going through a high-water mark under Benjamin Netanyahu and Narendra Modi. On Sunday the Israeli Prime Minister will begin his tour of India along with 130 businessmen for trade talks which will also cover defence sales and attempts by Netanyahu to woo the India’s film industry.

The trip, according to Israel’s foreign ministry deputy director general for Asia, Gilad Cohen, is meant to further deepen political, trade and cultural ties between Israel and India.

Indian news sources reported that one of Netanyahu’s stops on the trip, the first by an Israeli premier since Ariel Sharon in 2003, will be in Mumbai where he will meet on 18 January with stars and executives of India’s mammoth film industry.

Netanyahu will attend a specially choreographed event “Shalom Bollywood”, which is said to be the showpiece events during the four-day visit. Indian press have said that the Israeli government is trying to get Bollywood’s A-listers, including top directors and producers, to attend it.

Indian political analysts have pointed out that the move by Netanyahu to woo Bollywood is “more political than personal. The ultimate goal is to fight the Boycott, Divestment and Sanctions (BDS) campaign against Israel, which has tried to isolate the country”.

“The Israelis are looking at Bollywood to fight the global BDS movement, which has impacted them… This event is aimed at getting movie producers to shoot in some of Israel’s picturesque locations,” a source told the Indian Express.

Israel’s image has taken a massive blow from the BDS movement. Wooing Bollywood is seen to be part of a broader strategy to reverse the loss of support of Israel in the world of art and music in the West. Last year, Israel’s move to woo Hollywood stars did not succeed, with none of the 26 Oscar nominees who were awarded free trips to the country taking up the offer.